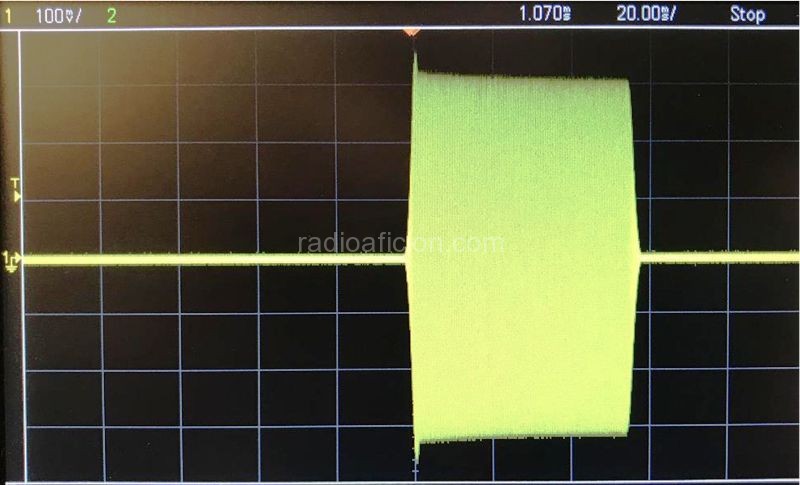 KE4WY (27 mai 2019) a écrit:I saw the overshoot and after 3 days returned mine to the dealer. The dealer confirmed it and while at Xenia I was told Yaesu USA also confirmed it and notified
Yaesu Japan.

I also notified Rob of what I saw and in testing he saw it.

W6NEK (29 mai 2019) a écrit:To add to the Elecraft solid state amps driven by the 101D, I run both the KPA500 and KPA1500 500/1500W amps on CW at full rated output. No ALC connected (as recommended by Elecraft). This is not to say that the overshoot problem should not be fix. It should be fixed immediately. However, using the Elecraft amps and the 101D on CW does not appear to be an issue. I notice no power output fluctuations. I measure the output power with LP-100A wattmeter set on peak power mode. I can't say how other manufactures solid state amplifiers would react to 101D overshoot issue but it should not be a problem in the first place. Come on Yaesu, fix the overshoot issue.

W6NEK (7 juin 2019) a écrit:Yesterday I dropped off my FTDX101D at the Yaesu Repair Facility in
Cypress, CA. Prior to bringing the radio in I called them about the RF
power overshoot issue. The nice young lady I spoke with said I could
bring the radio right in. She emailed me the form to fill out that
describe the reason for the repair return.

Next I told her that since Yaesu will already have the radio to go ahead
and install the optional 300Hz roofing filter. I was a little surprised
to hear that Yaesu's policy regarding filter installation is a bit
convoluted. She told me to contact one of Yaesu's distributors and order
the filter from them. Once ordered and paid for, the store then notifies
Yaesu and Yaesu then perform the filter change in their facility. So I
called HRO, ordered the filter, and they in turn sent verification of
purchase to Yaesu.The next day when I took the radio in they had
received the conformation from HRO regarding the filter. (personal note:
at a price of $258 + tax this is a pretty expensive filter. Add to that
a $30 labor fee for Yaesu to install the filter and I must admit I had a
small pain in the pit of my stomach). When I returned home I had
received a email receipt of acceptance of the radio by Yaesu. In
addition they indicated turnaround time will be 1 to 2 weeks. I was
impressed with the attentiveness and level of professionalism shown by
Stephanie Fears in Customer Service.

This morning I received a phone call from Yaesu. It was Tim from
Technical Support. He indicated that my radio was being worked on as we
spoke. He wanted to know if I was using the 101D with a RF Amplifier. I
told him I was using a Elecraft SSD Amp with NO ALC connected. I
indicated that if I was careful on SSB I could get by with the amp.
However if I close talked the mic the amp would fault protecting itself
from excessive power input. Tim indicated they are keeping a log of all
101D's returned for the RF overshoot issue. He was interested to hear
what type and model linear amp was being used and its operating fault.
Tim did confirm that the issue was fixed and implemented in all new
production radios. I found Tim to be friendly and enthusiastic in our
discussion. He also provided me with his phone extension if I had any
additional questions or issues.

No one likes to return a radio to the "mother ship" for repair. I am
lucky that I live just 8 miles from the Yaesu repair facility. However,
based on the professional manner I've experienced I have full confidence
that the radio will be fixed to my satisfaction. I'll let you know once
the radio is returned.

G4IRN (31 mai 2019) a écrit:I have a good connection in Yaesu UK and my local dealer (MLS) also has great connections into the factory in Tokyo - I reported the issue to them both and I gather that Japan were already aware of the issue.

The dealer called me today - Tokyo has advised a solution that requires a component exchange (one resistor for another, from what I can gather) and my radio will be fixed under warranty.

So the issue is recognised and I think we owe Rob Sherwood a big thank-you for his report on the matter - his reviews are held in high regard.

Although the warranty fix will take 30 minutes I won't have time to hang around tomorrow when I drop it off, so the dealer has committed to dispatching it back to me early next week. I will report back on the success (or otherwise!) of this fix.

W6NEK - 15/06/2019 a écrit:Yesterday (6/14/19) I picked up my 101D from Yaesu repair. They were to
install the RF power overshoot FIX and install a 300Hz roofing filter.
The work was done in 4 business days. Upon pickup the radio had been
thoroughly cleaned, new screen protector applied and wrapped in a new
poly bag.

The test:
Prior to the FIX I could set the drive power on my 101D to just 10 watts
and by close talking the mic it would trip the amp into protective
shutdown. The amp failure code was excessive input drive power. The
spiked amp short duration output was in excess of 1500 watts at the time
of shutdown.

The FIX:
I setup the radio on CW pushing the solid state amplifier with 40 watts
of drive. This resulted in 1500 watts output as displayed on my LP-100A
vector watt meter. I switched to SSB and spoke in a normal voice level
driving the amp to full power output. Then I shouted into the mic and
the amp output remained the same. Finally I placed the mic less than a
inch from my mouth and repeatedly screamed into the mic. Power output
remained at 1500 watts. Output power levels are now rock solid. I'm
happy with the result and no longer fear power spikes tripping amplifier
faults. The "FIX" works.

According to the repair document it shows that a a single chip resistor
was replaced. The Yaesu part numbers on the repair order doc is:
CHIP RES. RMC1/10T 101J
Ordered as J24205101
Looks like a 100 ohm resistor but with no other information it's
impossible to know where it is located.

All the testing was done using a 50 ohm 2.5KW Dummy Load.

N9VC - 28/08/2019 a écrit:I have used my 101-MP with my Acom 600S, with no problem.
No overshoot noticed, but mainly use it barefoot at 200 watts,
which was the reason I purchased the radio.
I have to say, the radio is more than what I was expecting. In
other words, it met or exceeded my expectations.

I competely share Jim comment "I have to say, the radio is more than what I was expecting. In
other words, it met or exceeded my expectations"
73 Giorgio